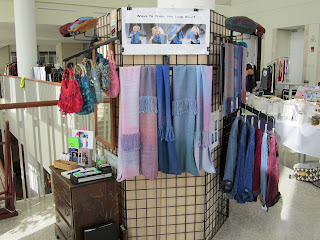 Sunday I did a show at UMASS Boston.  It was sponsored by the Laboure Center which is part of Catholic Charities.  The Laboure Center helps woman and children who need resources and assistance.  The event was a fashion show and boutique fund raiser.  I was part of the boutique. 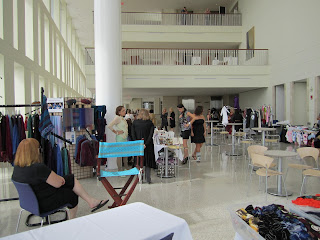 It was held in the campus center which looks out onto the Ocean.  What a beautiful setting.  My space was set up in a place where I could look out on the water on one side and on the other see Sister Corita's wonderful abstract rainbow painting on one of the gas tanks on the shoreline.  You can Goggle her to learn more about her. 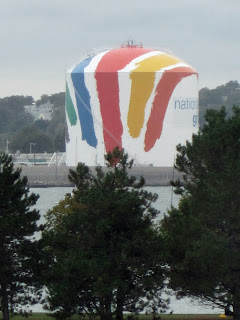 I sold a couple of my hand dyed loop scarves and when I went to the ballroom to take a peak at the fashion show, I saw that one of the women was already wearing the scarf!  What a lovely compliment!
My next show is this coming Saturday and Sunday at Wheaton Arts in Millville, NJ.  I have been doing this show for 7 or 8 years and it is always a good show for me.  You can get more information by going to my website, http://www.judyconnorjones.com/. If you are in the area, please stop by, let me know that you follow my blog, and check out my warp painted hand dyed loop scarves. 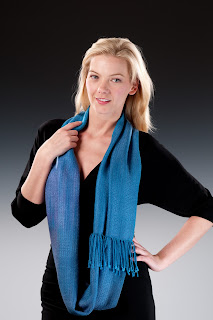 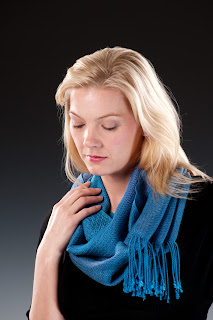 Email ThisBlogThis!Share to TwitterShare to FacebookShare to Pinterest
Labels: My Work, Shows and Exhibits 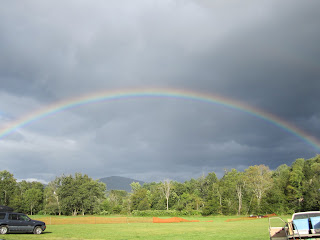 At the end of the Mad River Valley Show, while we were breaking down, a beautiful double rainbow appeared!  Since we were in an open field, you could see the complete arch.  This actually was the second time that weekend I saw a rainbow.  This was the more spectacular one.  Those of us who were still taking our tents down, stood in awe at the sight.  One of the exhibitors remarked that our "Pot of Gold" was waiting at the end! (Maybe that means the next show!) 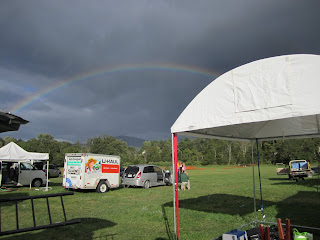 The Mad River Valley Show was a success.  Sales were down from last year but better than the year before.  It seems to be a fairly stable show take a few hundred dollars one way or the other. Would I have liked to have done better?  Yes, but there are other pluses to doing this show besides income.  I love being in VT this time of year.  The scenery is beautiful and the weather is usually a little "coolish" in the morning and evening giving me a taste of fall. I also get to visit with other artist friends who have become like family.  It's a happy time.  Despite the threat of rain, it held off until the very end and just a few sprinkles occurred as we were taking down the tent. It actually was a beautiful weekend. 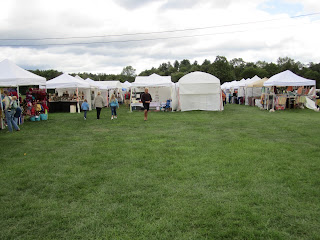 So the rainbow is a promise.  Take it to mean what ever you want.  I choose to think it means hang in there, good things are coming! 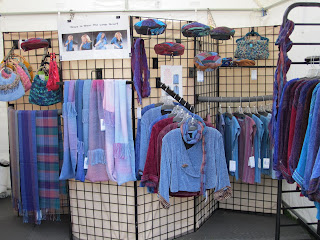 See you at the next show!  Check out my schedule at http://www.judyconnorjones.com/
Posted by judy at 10:48 AM No comments: