The Dog On the Loom Part 2

A few months ago I wrote about "the dog on the loom", http://studiojottings.blogspot.com/search?q=The+dog+on+the+loom, and explained what that meant. I was weaving a liturgical stole for my husband for the 40th year celebration of his ordination.  Well the day came and went and the stole was not completed. The celebration was in May and since we were entering the common time in the liturgical calendar he was not going to need the white stole until later in the year. Much later in the year - Christmas Eve!  Guess what! He needed it for tonight!  I am happy to say that the "dog on the loom" became the beautiful white and gold stole that my husband wore tonight. It was transformed - like magic (with a lot of patience and help from me)! Kinda like the transformation that happens on Christmas Eve.  To put it simply, a baby comes into the world in a lowly state and transforms it.  What a mystifiying and magical night! May the world and all who live in it be transformed once again.  O Holy Night!
﻿ ﻿ 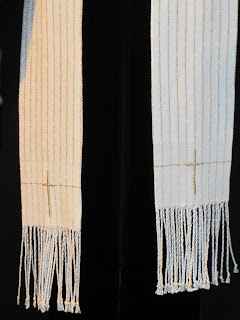 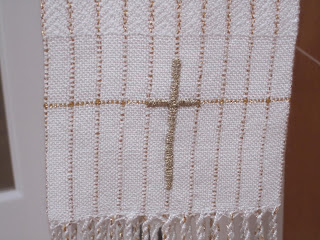