Its now the Christmas season in the liturgical calendar.  During the advent season I worked once again with my church on a participatory art installation.  During the four weeks in Advent a new piece of the installation was added with the last piece installed on Christmas Eve.
Working in a large scale format has been something I have been learning to do over the last couple of years.  It is so totally different from my "women's wearable" work and so challenging that  I am always amazed at how it turns out! I am committed to these ecclesiastical projects being not just observed but participatory.  So in the planning many points of varied participation are built in.  The process goes sort of like this:
Themes for the season, based on biblical passages, are developed by the persons responsible for worship.  Sometimes it is a committee but more times it is my husband who happens to be the minister of First Baptist Church in Plymouth. We usually discuss various ways the theme will be played out in worship, I put on my thinking cap (usually in the shower!), and after much dreaming and envisioning come up with a basic idea.  At that point other people are brought into the planning process and ideas begin to come together. Many times the idea evolves more fully as the piece evolves.  Any artist will tell you, its an ever ongoing process!!!!!
The theme for this advent was Being/Becoming a People of Hope, Peace, Justice, and Faith.  Each week in advent one of these themes would be the focus of worship. We chose to make banners out of silk which had these words stenciled on them, one word for each week, four banners in all.

So planning was the first point of participation involving members of the congregation. The second point of involvement  was in the actual making of the piece.  We had a total of 14 people involved at some point in the making and installing of the piece. This involved preparing the banners by sewing hems, making the stencils, and stenciling the words onto the banners. 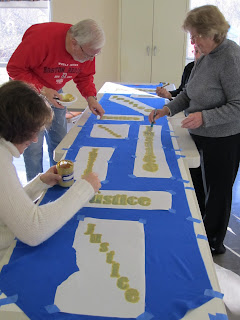 The installation was another challenge as we decided to install the banners in the round at the front of the pulpit area.  I am so thankful that we have one man in our church who can always figure out how to do this.  I just have to say to him, Mike, this is what we want to do and how can we do it and he comes up with the idea!  I call him my "Install Guy".  "He's The Man" and I couldn't do it without him!!!!!! 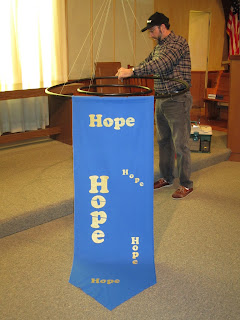 So now we have two points of participation or connection.  The third point happens each week as people enter the church and see the addition for that day's worship theme.  We also had an insert in the bulletin each week which asked reflective questions so the worshiper was drawn into the piece in a way other than simply viewing it. 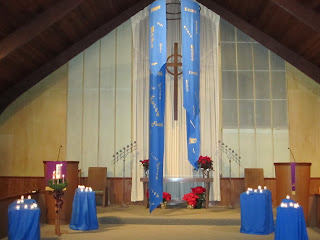 As each person entered the sanctuary they were given a white dove cut out of cardstock. At one point in the worship service they were asked to write on the dove the answer to the following question, where do you see signs of ........ (Hope, Peace, Justice, Faith)?  The doves were collected to be used on Christmas Eve. This was point four of participation. 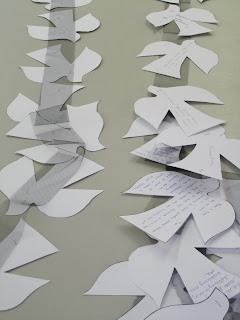 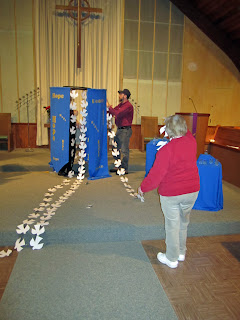 The final installation was on Christmas Eve when all the doves were installed in a descending manner in the center to celebrate the coming of Christ to the World. This created the fifth point of connection as all could view the final installment and celebrate that "Christ has Come"! 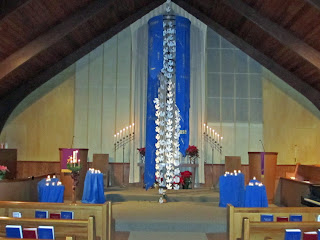 Since the Christmas season has just begun in the liturgical calendar the installation will be up for a few weeks.  You can see more pictures on the church's website at http://www.fbc-plymouth.org/. If you live in Plymouth, stop by on a Sunday and you too can experience "this thing which has come to pass". 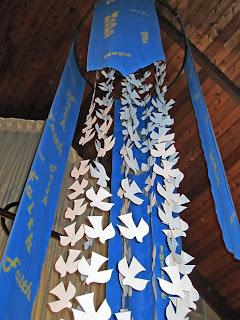 "And the Word became flesh and lived among us, and we have seen his glory."
Christ has come! Hallelujah!
Posted by judy at 5:14 PM 3 comments:

The first snowfall of the season happened today and is still happening as I write!  The wind is blowing and the snow is coming down.  It looks so beautiful with all the Christmas lights lit on the houses along our street.

I was finishing up an order for a customer today and it was so nice to be warm inside looking out on the beautiful sight as I worked.  there is a peacefulness about falling snow.

Here are a few pictures from my studio window taken this morning. 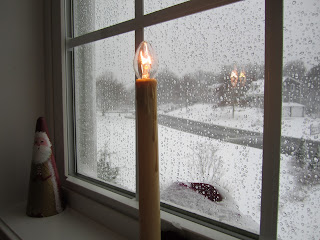 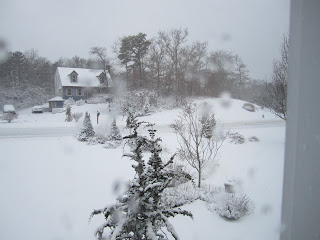 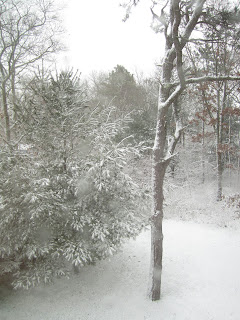 Later this afternoon I took this picture from our kitchen, looking out our back deck.  You can see the snow flakes. 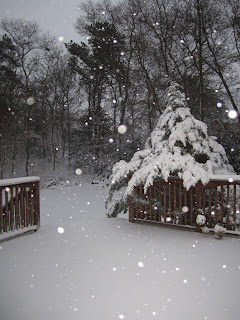 ﻿
So it's really "beginning to look a lot like Christmas"!  Just in time for my family from Florida to arrive!﻿
Wishing you the Peacefulness of New Fallen Snow!
Posted by judy at 8:43 PM No comments:

Email ThisBlogThis!Share to TwitterShare to FacebookShare to Pinterest
Labels: Holidays 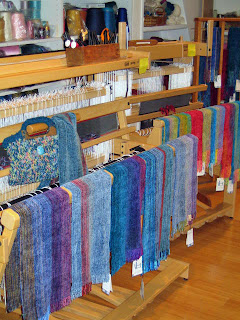 My last show of the year is always in my studio.  The looms are pushed back, the fiber dust bunnies are gone (or at least most of them), and I arrange the studio to look like a shop.  You can see all my equipment (looms, warping boards, shuttles, sewing machines, etc) and the many types and colors of yarns that I use.  It's a chance for you to see where and how I work with the added bonus of holiday shopping in a relaxed atmosphere and purchasing that special gift for someone on your Christmas list. 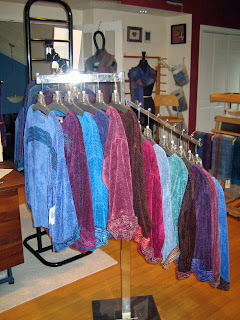 I also serve a wonderful Wassail punch along with some of my Christmas cookie favorites! Wassail for those of you who are now saying, "What is that!", is an Ancient English custom where the master of the English household (sorry for the not so politically correct gender reference) drank to the health of those present with spiced ale.  The phrase Wass Hael or Be Well was repeated as each drank a cup from the bowl of Wassail.

If you are near Plymouth, stop by the studio on Saturday, drink a cup of Wassail, do some Holiday shopping, and sign up to win the door prize.  I haven't decided yet what it will be but I'm leaning towards one of my $85 chenille scarves.