Ever have that feeling that it's time to move on from the old to something new and not know exactly what that is?  This year has been all about that feeling in the life of Judy Connor Jones. In March I began a process of taking a look at what I have done for 27 years with the business of Judy Connor Jones and pondering (more like searching) where I am going next. It's a daunting task to move from the familiar to the unknown and yet all the while knowing something new needs to happen. I've been working through Jane Dunnewold's on-line Creative Strength Training class which has given me the freedom to play, explore, and process the next step. It also has given me the encouragement to step out and create new work in new areas. One of those areas is Ecclesiastical Installations. I've dabbled in this off and on for around 10 years.

This Advent season I had the chance to create work for First Congregational Church in Madison, CT.  This was the first time I have ever been approached to do this type of work on a commission basis in a church where I am not a member or attend. This was HUGE! They were actually going to pay me! So early in the year when I was contacted and asked if I would create 2 panels with a contemporary looking star on them for Advent, I said "Yes. I can do that!" OK! Excited? YES! Did I know how I was going to achieve this? NO! But I was excited to begin the process of discovering how it was going to happen. 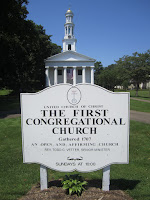 I wandered around the church and took lots of photos from all angles of the space where they would hang. I took photos from the front, sides, and back of the sanctuary to see how they might be viewed. Then I went home to figure out how this was going to happen! 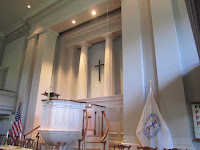 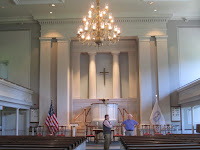 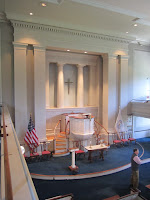 The easy job was ordering supplies, fabric and paint. The hard part was finding a space to create the work. After some thought and measuring my studio space, I moved my looms and a few other equipment pieces to the side so I would have enough space to work in my studio. This proved to be more valuable than I thought. Naively I thought I would just prepare the fabric, lay it out on a table and paint the star! Presto done! Maybe two days to paint the stars, 2 days to prepare my studio, 2 days drying/curing time and another day to do finishes, hanging devices and instructions, along with other incidental work that needed to be done to complete the project. Boy, was I wrong!  It wasn't quite that easy. 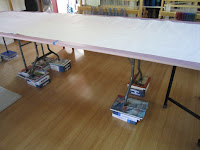 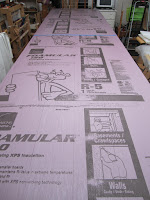 I started making drawings from my photos, setting up the studio, and washing and ironing 30 feet of fabric on October 21. the project was completed on November15.  Granted I didn't work every waking hour but it took that long to work out all the steps I needed to go through to create the work. I was thinking and re-thinking each step. For instance, after the first panel was done it became a challenge to figure out how to create the second so it looked similar to the first. Since these were hand painted they couldn't possibly be exactly the same. I made that happen by using a carbon pencil, tracing the first star, then transferring the carbon markings to the second panel. It worked!! 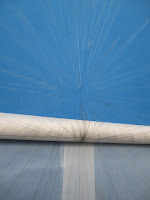 The greatest challenge was creating the star proportionally to the 4' x 15' dimensions of the panel and proportionally to the sanctuary size. Keep in mind that the largest panel I have ever done in a church was 2.5 feet x 11 feet. This project was double that size. And there were two of them! Also keep in mind that I am only 5 feet 3.5 inches tall! With the work flat on a very long extended table and having to walk around the table to paint across 4 feet of fabric, I soon discovered that it was hard to see the full prospective of how things were looking and if everything was going straight. I needed to figure out a way to see the full prospective. So periodically I moved the panels to view them draped down my studio steps.  This was the largest space in my house that could give me a better look at where I needed to extend, add, and/or in some cases, straighten rays. 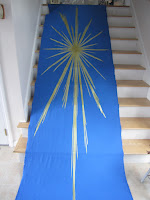 Once both panels were painted, the dowels were prepared for hanging the work. Installation directions were written and off to Madison they went. I held my breath and hoped that everything would look good when installed.

Last weekend, the second weekend in Advent, my husband and I traveled back to Madison to see the panels in their new home. My wish was that they would inspire and in some way bring new light to the congregation's experiences during the Advent season. From the response I received when worshiping there last weekend, I would say my wish was fulfilled.

I'd like to close this blog post with a quote from the minister of the First Congregational Church, The Reverend Todd Vetter. I love the idea that the Star is reaching down touch and meet each of us.

"The Star has become synonymous with the Advent and Christmas seasons. We know the story of the Wise Men following it from the East, in search of a king newly born and carrying the promise of God with him. The light of the Star symbolizes more as well. The rays on the banner serve as a sign and reminder this season that God's light reaches down to meet us where we are and as we are, and to dwell among as Immanuel, God-with-us, God-forgive-us, and God-in-us. 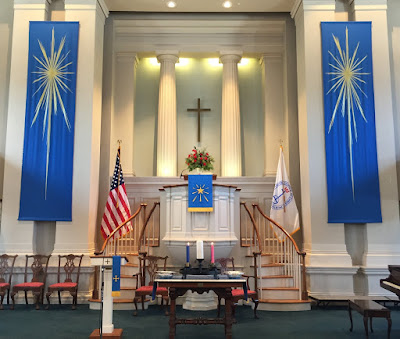 Despite all the turmoil in the world today, May this Star be your Light this Holiday Season.

What's happening in the Studio? 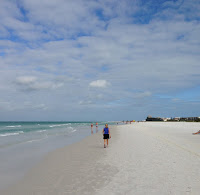 So what have I been up to in the first half of 2017? For starters I took some time off to relax, be with family, and enjoy the sunshine in Florida. I've realized that the sun energizes me and so my time in Florida is alway a wonderful time to be inspired. 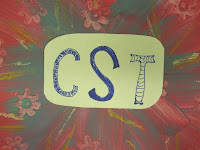 To help that process I enrolled in an on-line class called "Creative Strength Training" led by Jane Dunnewold and her daughter, Zenna. This course is jam packed full of ideas, processes, fun, and serious contemplation. I am enjoying it to the "nth" degree! Since I've been going through serious re-evaluation of where my work is going, this is exactly what I need. Questions like, do I want to continue doing shows, do I want to continue making production items to sell, what will give me satisfaction in the work I do, how will I continue creating with physical ailments increasing, and most of all am I having fun and enjoying what I do, have been an on-going conversation with myself for a couple of years. 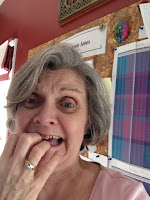 So as that process continues, I am discovering some things.

1. My work needs to change. I work at a slower pace and am excited about creating new work that challenges me.

2. Learning and playing with new techniques is energizing.

3. Production work is not satisfying any more. It was a good run but it is time to move on.

4. I need to connect with artists of all mediums to explore and discuss new possibilities. The CST class has a wonderful Facebook Group with which to share insights, discoveries, and new learnings.

As I explore and move through this process I'd like to share some new work I'm developing. I've been working with this technique for about a year and I am enjoying the fact that it is an off loom technique. That has given my body some time to heal from all the years of weaving on a loom to produce for sales. It also gives me a sense of excitement to see how each piece turns out. 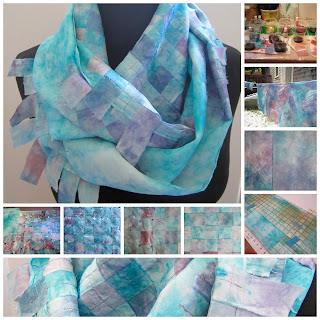 I started working with the technique by making silk scarves, both infinity and loose hanging. I just recently worked on a narrow version. I am selling these but they are limited in production. Each one, since the dye patterns are not duplicated, is truly one of a kind. As I explore I try to create new ways of weaving them.


My CST on-line course is definitely an influence as I work on who I am as an artist and what I am meant to do and be. I have new ideas running around my head. Hopefully the ideas will emerge into something new, exciting, and wonderful. It's a challenge but, oh, am I having fun! Stay tuned!