Pastel scarves are done! I've completed the third group of scarves using the "Ruffle" technique or in weaver terms, differential shrinkage.  That is when you use two yarns that have different shrinkage capabilities like wool and tencel, which is what these scarves are made out of.  I also added some silk to the mix here which also does not shrink. The wool shrinks as in "oh no, I washed my wool sweater and it shrank"! But when you do it on purpose, add a non-shrinking yarn, you get a great effect.

I used a different type of wool yarn in these scarves and they did not shrink up as much as the blue/green scarves.  They have a softer look as in the first scarves I did (the pinkish/brown ones).  So here are the pictures. Do you have a favorite?

You can see all these scarves at my Trunk Show/Open House at my Plymouth Studio on Saturday, May 5 from 10am - 5pm.  I'm working on another series of ruffled scarf. I'm calling it a "Scarflace". Hmmmmmm - what could that be?

Till next time ------ enjoy the bouquet of scarves! 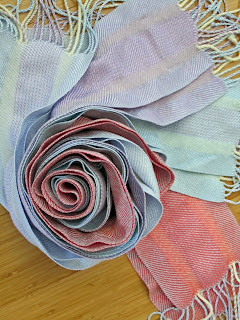 Email ThisBlogThis!Share to TwitterShare to FacebookShare to Pinterest
Labels: My Work, Shows and Exhibits, Weaving and Designing Process

I rarely do pastels.  I decided that I would like to try pastels for these scarves as my next group in this series.  I am trying to reach customers in warmer climates and also provide scarves for three season wear. Not that bright colors cannot be worn in warmer weather.  Sometimes the brightest colors are evocative of spring flowers and summer heat.  However I thought it would be fun to see how pastels might work in this technique. Here are pictures of the warp going onto the loom. In weaver terms this is called "beaming".  The whole process of putting the warp on the loom from beaming to threading to tying on is called "dressing the loom". 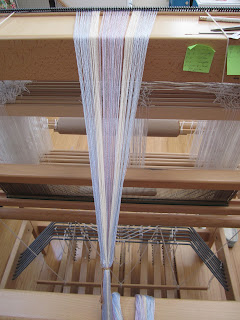 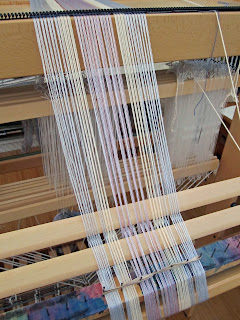 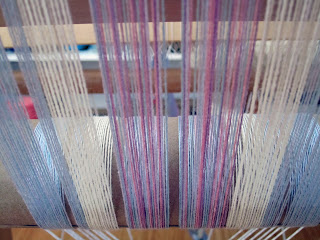 Email ThisBlogThis!Share to TwitterShare to FacebookShare to Pinterest
Labels: Equipment, My Work, Weaving and Designing Process 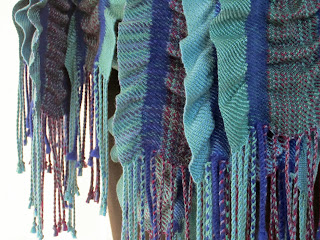 In the last post I wrote about the new scarves I've been working on.  My vision was to create a scarf that would ruffle and give the wearer many ways to show it off by wrapping, twisting, or just draping.  I wanted them to be long and to dangle. Series Number One came out somewhat ruffled .  I had hoped for more.  They came out long but I wanted them to dangle to give a lariat necklace effect.  I began to think how I might get more of a ruffle.  So I redesigned the next warp. By extending the edge section by 1/4 inch on both sides, increasing the wool section to 3/4", and decreasing the middle section, it caused the wool section to shrink more and the other sections to seersucker more.  The results are my Series Two Scarves. 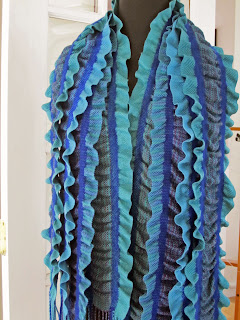 I love the way these turned out!  The interesting thing about it is as the ruffles increase, the length gets shorter to accommodate the ruching of the fabric.  These scarves were woven exactly the same way and washed and finished the same way as the Series One Scarves but they shrank up to 40%.  Series One Scarves only shrank 27%. Series Two Scarves came out to be 56" - 58" long while Series One Scarves are 71"-73".  So what does this mean for me?  Well it means that if I want the more ruffled scarves to be long I will have to weave each one 120" instead of 91".  That will take more time which of course means I will need to charge more for them.

The other factor is I may never achieve consistency in the length or amount of ruffling as the water temperature in my washing machine (which I cannot control accurately) is a big factor in how much the scarves shrink.  I use to have a machine that regulated the temperature of the water so I could be pretty sure that it would always be the same.  My current machine does not do that so I never know if warm will always be the same temperature every time I use it.  It varies a lot. Thus the amount of shrinkage will vary also.

I've decided that if I want to address the dangle issue, I need to go back to the drawing board and design a scarf that is narrower with one strip of merino wool down the middle.  I think I might be able to achieve this effect that way. That will be my next series.  Stay tuned!