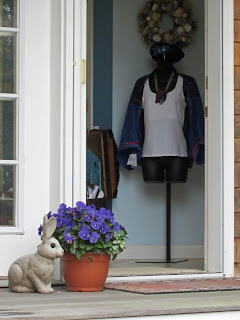 How to tie a scarf.......or I could title this post, "A Star is Born"!  You see I've had this idea........... for a long time I've wanted to do a video on scarf tying.  I repeatedly hear from customers that they never know how to tie a scarf or what to do with it. Along with how to wear a shawl, it seems to be the biggest fashion challenge for many.  So I am always demonstrating ways to wear scarves and shawls.  After I do this the next comment is usually, "Oh can you come home with me?  I'll never remember how to do that!" (Does this sound familiar?)  So I've been on a quest to find someone who could film a video of me tying scarves.  I could then put it on my website and customers could watch it anytime and remember how to tie the scarf that they purchased.

So one day a funny thing happened. As I was in conversation with a friend who had just lost her job in publishing,  she was telling me how she was looking at new options and what she might do.  When I asked what she was exploring, she told me about a class she was taking at our local TV station.  Plymouth TV has this wonderful program where they teach classes on videography along with providing assistance to help students make their own films.  Can you hear the wheels starting to turn in my brain?  Excitedly, the next words out of my mouth were, if you need a project to work on, I've got one for you!  After explaining my idea to video me tying scarves she was intrigued.  (I have this added bonus that she likes my work and what I do!)

After thinking it over she e-mailed me to tell me that she had been thinking about the possibilities and much to my surprise was not only interested in what I proposed but expanded the project.  Seems that when she ran it past PACTV they were interested in doing a series of shoots and putting them on the TV. Oh my gosh!  "Moi" on TV!!!!!! Of course immediately I started thinking, they say you look 10 pounds heavier on TV. Yikes!!!!!!!!! How fast can I loose some weight!

So Robin and I began to plan the project, what we would film, when we would do it, and how we would go about it. We started filming in May and met on Tuesday's as often as our schedules allowed and by the end of summer the filming was complete.  Not only had we filmed tying of scarves but also the weaving process, studio set up, and an interview, all to be aired on our local TV station, PACTV. 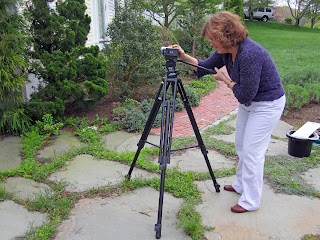 After Robin did the editing, corrections, and adjustments (I'm sure these are not the technical terms), the video was ready to be aired.  The first showing was this past Sunday, October 21.  The reality of it being on TV didn't hit me until the first frame appeared with the title "Scarves in Motion" and there I was talking to viewers about how to tie a scarf! 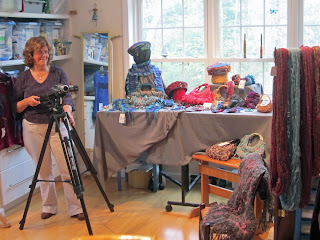 I don't know how many people saw it.  It is a small TV station and viewing audience but I couldn't believe I had actually done it and I have to say it looked pretty good!  (And no I didn't loose any weight before it aired.)  My husband thinks I came across with the presence of an HGTV host!  I may be hard to live with after this!!!!!!! 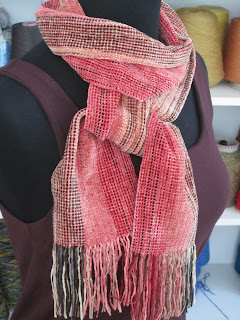 Thanks to Robin MacFarlane and PACTV for making this experience a possibility. You are awesome!

Email ThisBlogThis!Share to TwitterShare to FacebookShare to Pinterest
Labels: Business of Art, Demonstrations and Instructions, Equipment, My Work, Other stuff, Photo Shoots, Places, Thoughts and Inspiration, Weaving and Designing Process

Did you know there is a National Spinning and Weaving Week?  There is and it is always the first week of October.  Many weaving and spinning guilds plan activities to get the word out that there is a thriving community which continues an ancient art to produce yarn and cloth.  It is a time to honor the importance of textiles in our lives and a time to educate the public, many of whom do not know how cloth and the clothes they wear are made.

The area I live in, New England, use to thrive on all the textile mills along it's many waterways. It was the industry that supported the economy for many towns.  Now many of these mills have become large old vacant buildings.  We are no longer a textile producing country. So when spinning and weaving week comes around, it is a great time to learn how textiles are made.  I encourage you to see if there are any guilds in your area and if they are having any special events this week. You can check the Handweaver's Guild of America site to find a guild, www.weavespindye.org. Or you can look up textile production on the internet and see what you discover.  You can also visit a textile museum.  If you live near the Washington, DC area, the Textile Museum of DC is wonderful.  It is located near Dupont Circle and well worth the trip, www.textilemuseum.org.  If you live in MA, the American Textile History Museum in Lowell is not to be missed, www.athm.org.  Lowell, MA was one of those towns whose existence and economy depended on the mills.  After decades of deterioration many of those buildings have been restored and they have become condos, offices, and artist's studios.

I will try to post some interesting facts or websites each day this week.  So check back and explore National Spinning and Weaving Week. It will be a great adventure into history along with contemporary artists who are working in this medium. 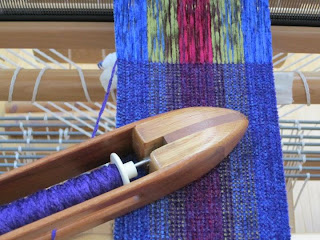 Email ThisBlogThis!Share to TwitterShare to FacebookShare to Pinterest
Labels: Other stuff, Places, Shows and Exhibits, Things To Do, Thoughts and Inspiration
Newer Posts Older Posts Home
Subscribe to: Posts (Atom)